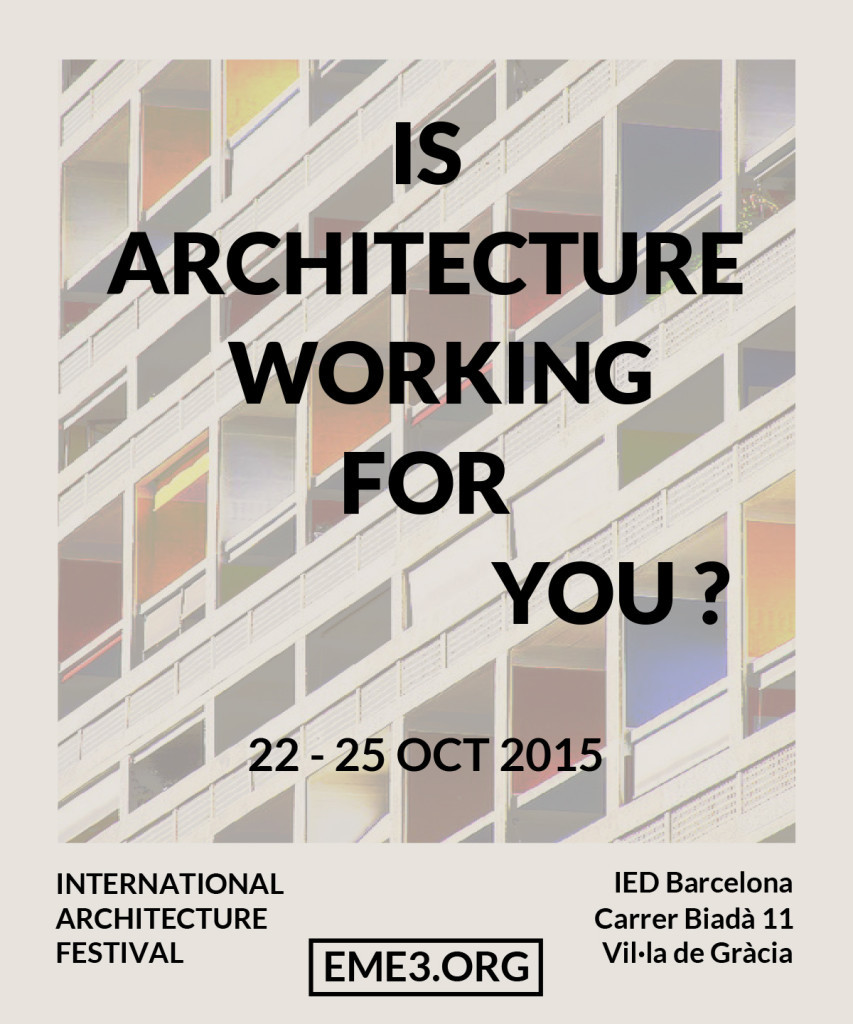 following the themes we had  explored during the previous years, we are questioning if “is architecture working for you?”.

this public enquiry wants to be a starting point for various debates and conversations that will produce relevant thoughts about new ways of doing architecture.

we will showcase/ promote a series of guest projects that work properly both for architects and users, as we want to confront the evolutive traces of the concept of the functional.

thinking about which issues and modifiers can grant a better experience for users ; we will ask ourselves where the influence of fashion and mainstream activities / choices  had replaced a good practice centered on users’ needs. 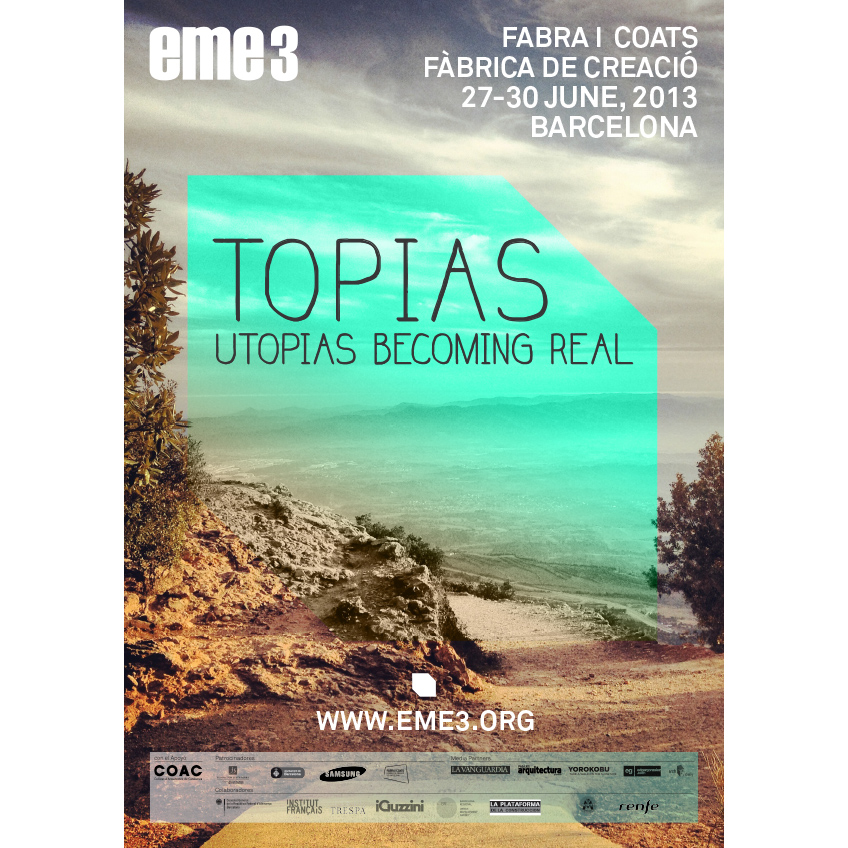 The 8th edition of eme3 Festival was held in Barcelona from June 27th to 30th at Fabra y Coats under the topic of “Topias : utopies becoming real”.

45 projects, from 17 nationalities, participated in the various sections of the festival.

“Topias, utopias becoming real”, meaning the passage of utopia to reality, was be the central theme, analyzing areas such as: new uses for urban public spaces (from self-management, empowerment and projects of collaboration); housing in situations of crisis (political, economical and environmental) and demographic evolution of the working space, for example co-working as a new space model. 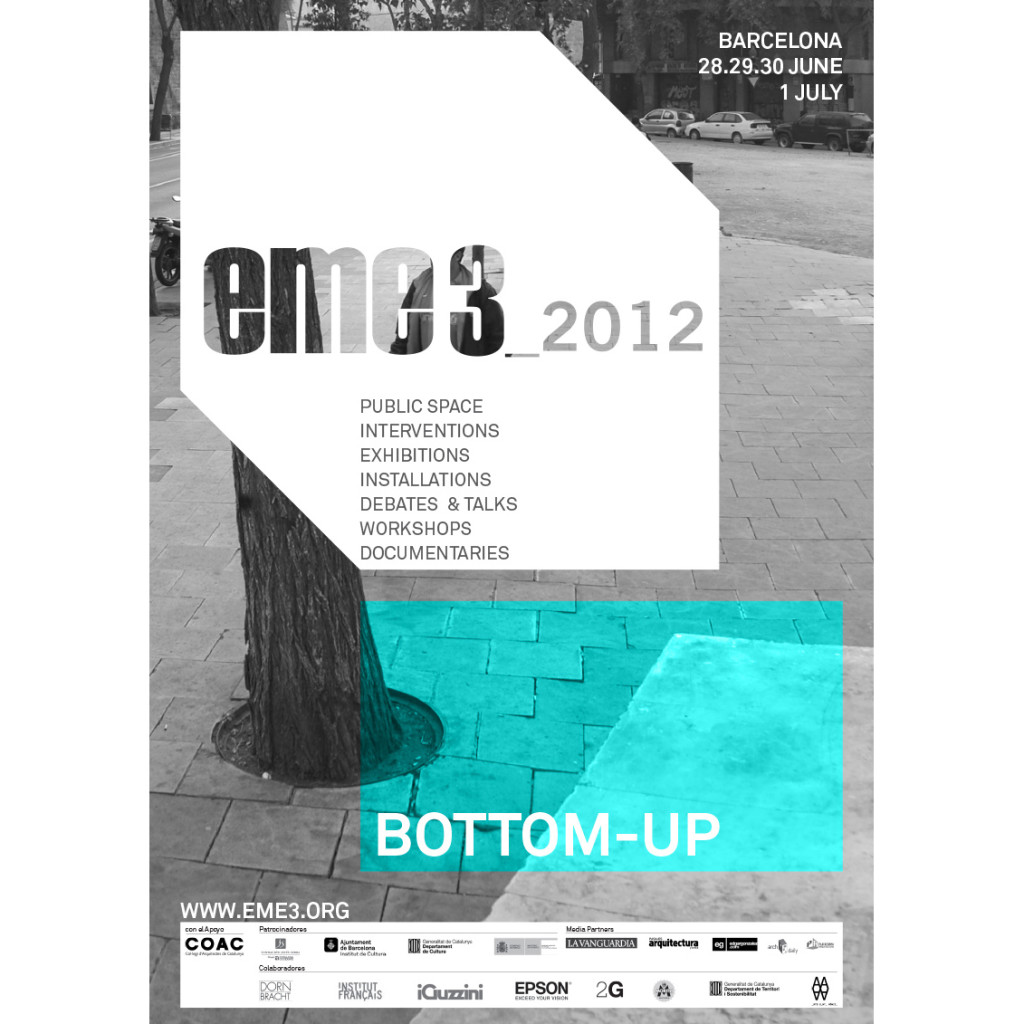 Urban tactics, inclusive city, urban gardens, use of abandoned lots and spaces, evolutionary strategies, participatory design, networking, open source and creative communities, are some of the concepts that emerge in the last years to describe an increasing trend outside the conventional practices which address urban situations and create new opportunities for the citizen and/or users. At the boundaries between architecture, urbanism, landscape, infrastructure, design and the digital world, these projects are the result of changing methodologies that adapt to a transforming context.

Under the umbrella of “BOTTOM-UP”, eme3 wants to present working methodologies and the outcoming results, in the form of urban, cross-participatory strategic interventions, that illustrate a process of creation and construction, at the same time than pedagogical and pragmatic, of a collectively decided entourage. 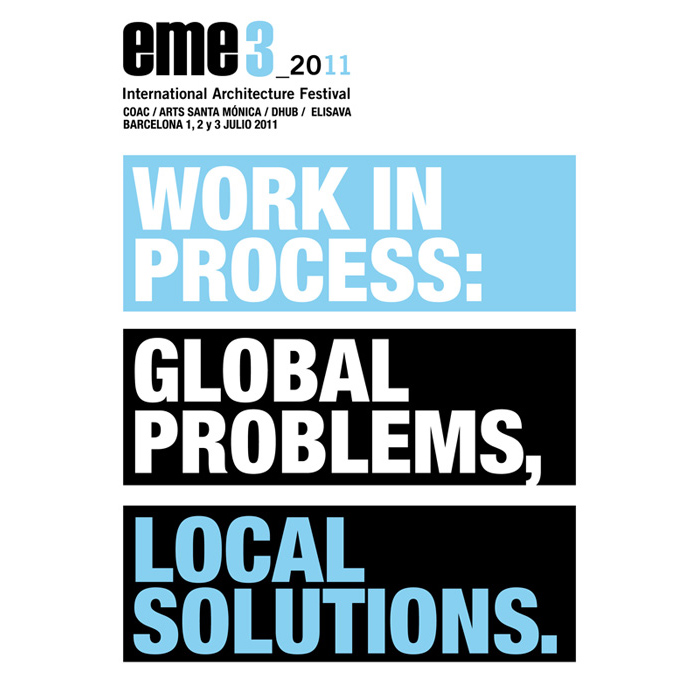 Participants presented their projects in a cross way in the different sections: market (exhibition), scale 1:1 (urban interventions and prototypes), debates and lectures, audiovisual sessions and workshops.

The eme3 guideline, characterized as a festival that questions and confronts different points of views on architecture and its relationship to society, intended this year to provide with concrete answers to global solutions, which were presented and discussed in the last 2010 edition.

Thus, among other, questions revolved around the contradictions between sustainable development and “greenwashing”, the appropriateness of the use of technology resources compared to “low cost”, the urban impasses or the micro-urban policies affecting citizens in their daily lives.

Eme3 started in 1999 as a Festival that celebrated a constellation of elements and inputs that emerged from the multidimensional and trans-disciplinary ethos of that times. Javier Planas had background as graphic designer and public events producer and eventual art director for cultural events. At the same time a very strong connection with the Arts and specially with the field of Architecture. At the point of constituting the Cultural Association ADN, it was clear that the intention was to unite the various disciplines on a context that would generate, not only exchange but cross pollination.

Architecture as a transformative tool and a deeply socially involved practice, was what made of it the core of the festival’s discourse.

Since those days in 1997/8 when the ideas to make such event started, the world has gone through out massive changes and quite apocalyptic events.

It is mostly during this convulsive years ( post 9/11, till this convulsive days) that Eme3 has navigated, against all odds. Under our Spanish and Catalan failed cultural policies of various sides of the political spectrum and with collaborators coming in and out of the project. Only love and a will to keep at the side of enthusiasm and continuum, has made of the work of Javier and its closer collaborators, worth noticing as  abnegated and very generous  about a series of believes, about our roles in this social fabric we all inhabit in one way or another, and to which we relate and keep a responsibility to. Eme3 then consolidates it self as a massive Catalyst of forces and creations that have benefited urbanist, architects and all its dependent context.

Looking backwards, we can see how figures and names, today considered as very relevant and occupying high places of responsibility, had been part of Eme3 as participants or guest years and years ago.

Coming to its 10th edition, across 17 years, Eme3 shows how important has been to survive so far, as part of what is done in our city and our context.

Again as a basically generous entity, it fulfils a role asked off festivals and honestly committed cultural events: to really be useful for its participants and public as to inform each other and as a tool for learning one of each other, producing ideas, passing information beyond closed circuits and cliques, opening peoples minds but specially their hearts.

This is why Eme3 has always transpired this element of celebration, this wanting to gather and connect, this unorthodox aura. As it is not a corporate or subordinated institution. Eme3 Institutes it self every time with every one who forms part of it. It re-emerges sensing the essential needs of every year that has managed to appear, giving opportunities to all implicated at all times.